Design and heritage collaborative design project between the Netherlands and SriLanka .

The Netherlands Embassy in Colombo invited the Academy of Design (AOD) to submit a proposal as an initiative which would entail a series of activities to put the Netherlands on the map of Sri Lanka through highlighting aspects of the ‘Netherlands’ in collaboration with Sri Lanka’ and the 400 year old relationship on the two countries.

In February 2014 I flew to Sri Lanka, to join the AOD graduates in the FUSE IT project.
For two months I worked together with eight Sri Lankan designers (Prabath Samarasooriya, Malka Peiris, Neth Mi, Luqman Basheer, House of Lonali, Nithya, Su.Re and Predeep) to create a fashion show at the Dutch Burger Union. All of us designed one ore more collections inspired by the Netherlands and combined this with a Sri Lanka craft.

I worked on a project inspired by Sri Lankan Sanni Yakum masks that were used as an ancient healing ritual that target a person’s psyche and helped them heal, and reinterpreted this concept to the Netherlands by picking certain negative mental traits of our society and personifying them as masks that provide a solution for these. (See this project here.)

And a knitting collection inspired by Dutch fisherman sweaters, created by women of the Mallaitivu Mallavi community.

Aside from designing these collections, I gave a Delft blue painting workshop to the foundation class, took part in a lace making workshop, visited a batik factory where a bicycle inspired collection was created, collected materials at a scrap market, joined a visit to a hand loom village to see how van Gogh inspired fabric was made and traveled to Ambalangoda in the south to find out about the story of the Sanni Yakum masks.

The FUSE IT fashion show video is coming soon!

Two fragments of the project diary:

March 4, 2014
“Last saturday me and three graduates from de AOD visited a batik ‘factory’ near Galle. We had to wake up early to catch the bus at 8 in the morning. After we arrived in Galle we had to take a tuk inlands. After a bumpy ride, again with the 4 of us in one tuk, we arrived at what was called the batik ‘factory’. Probably I have a western (or dutch) view on factories, but I always associate factories with big ugly buildings, a lot of machines and toxic fumes. This factory was nothing like that. It was a very friendly looking collection of found furniture surrounded by coconut trees under a little roof.

Because there was nobody when we arrived we had the time to take a look around and see the different parts of the ‘factory’. There was a place where they melt the wax to put on the fabric, barrels where they dye the fabric after they had put the wax on, and a place where they can cook the fabric to remove the wax. After an hour (Sri Lankan’s are not really strict in their timing) the owner of the factory and some workers arrived.
Sesha and Pradeep explained her the designs they had made for the Fuse It project. While discussing the designs, some changes had to be made according to the batik technique.
When you design something for batik you have to keep in mind that what you ‘draw’ with the wax will stay undyed. This means you cannot make a dark pattern or design on a light background, but only the other way around.
When all the designs were discussed she showed us how the ladies were making the batik. One lady was cracking the thick layer of wax, to give it the typically batik look. Another was using the melted wax to draw a pattern on the fabric.
It keeps amazing me how people can make such beautiful things in relatively primitive circumstances.” 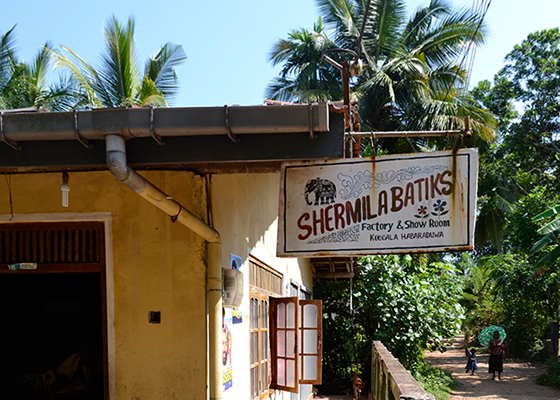 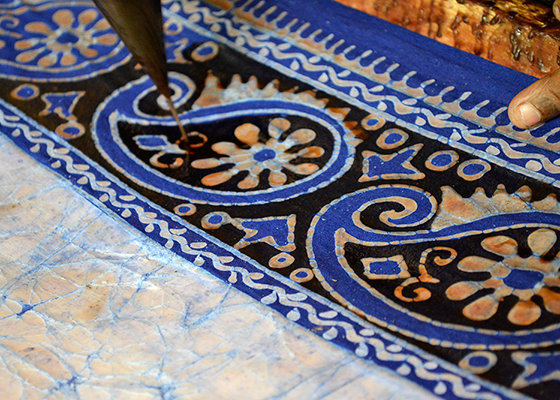 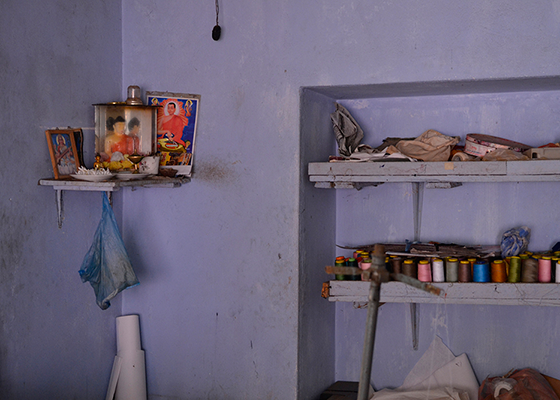 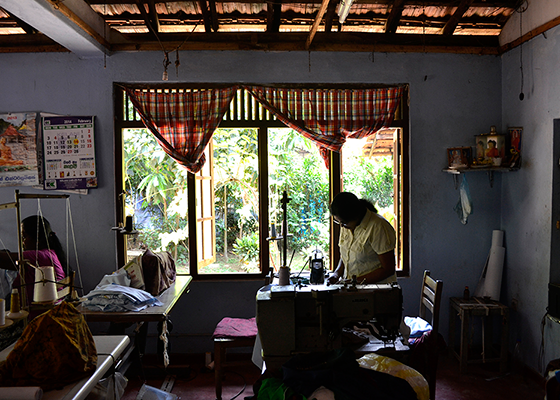 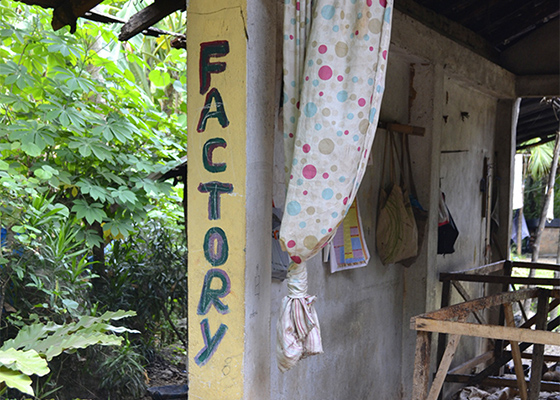 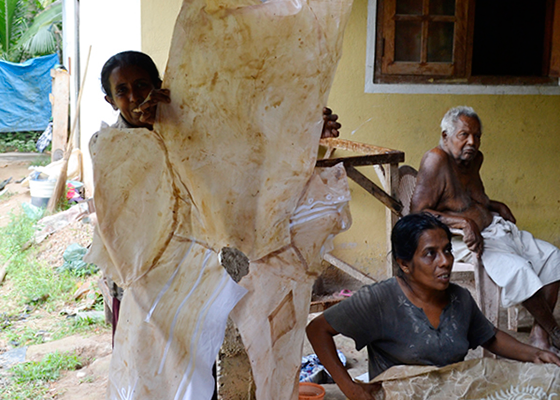 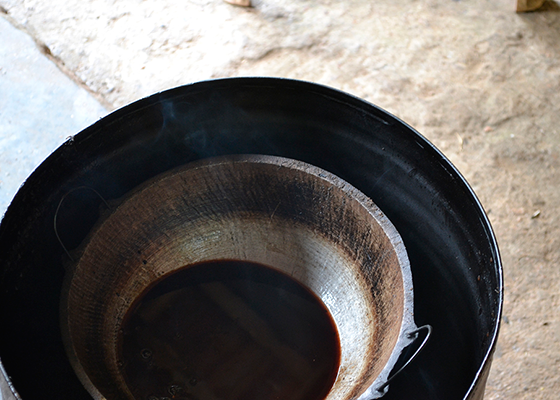 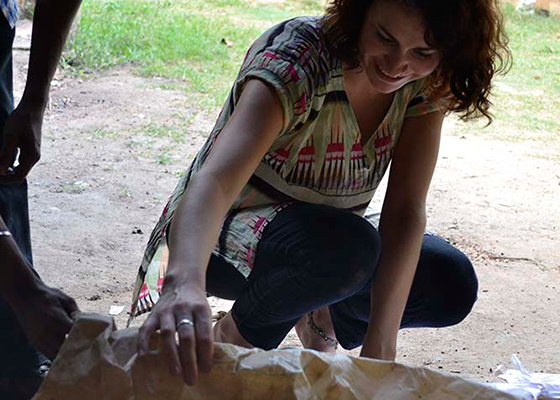 February 23, 2014
“Last thursday a hand loom specialist from the AOD , two graduates and me went on a trip to Divulapitiya, a village near Gampaha. This village is one of the many focus areas from the Island Craft Project. The Island Craft Project is a part of the Design For Sustainable Development (DFSD), which is a non profit venture conceptualised by the AOD. Around 70 textile weavers live in this village. The DFSD is active in this region for about two years. Two years ago the textile weavers had little or no orders. Although the craft has been practised for a long time, its survival is in danger as the youth of the area seldom aspire to take on the craft as a livelihood. Miss Shilanti (the hand loom expert) told that when she got involved with this project the weavers could only manage to weave very simple patterns with two shafts. This technique is used when weaving Sari’s and other simple textiles but since the DFSD’s mission is to help the artisans to link with new markets they have learned to work with more complex designs.

After an hour of driving we arrived at the weaving centre which is instituted by the government. In this building we met several weavers who asked Miss Shilanti for new orders. She brought new designs and sat down with the weavers to explain them. For the DFSD they make scarves, throws, table mat’s, cushion covers and other textiles. Also, when a student from the OAD wants to use  hand loom textile for their collection, they can collaborate with these weavers. After a few hours of explaining designs, sorting out colours and weighing materials we visited a few weavers at their house. Most of them have one or more hand looms under a shed in their backyard. The weavers get the yarns as a bundle and have to put them on a cone before they are able to use it. Sometimes their lands look like a little factories with all kind of machines covered with pieces of thread. It was really interesting to see how the hand loom was a big part of their life, which involved the whole family” 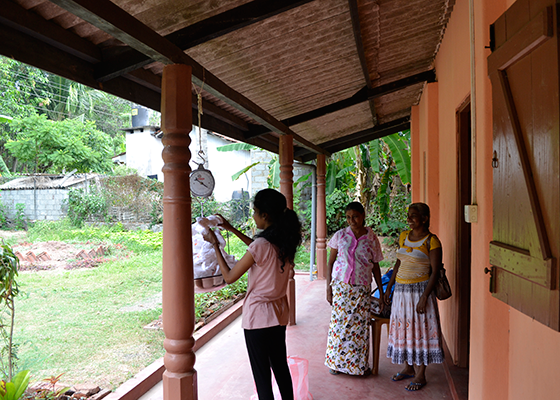 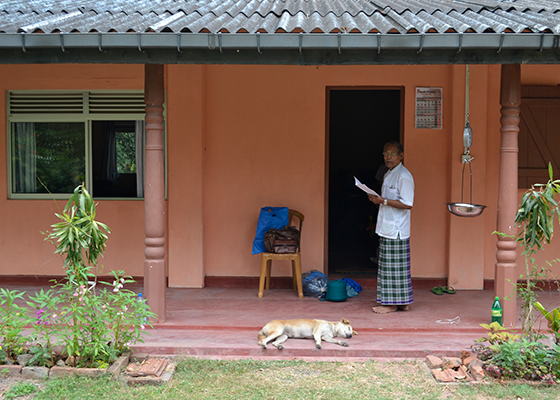 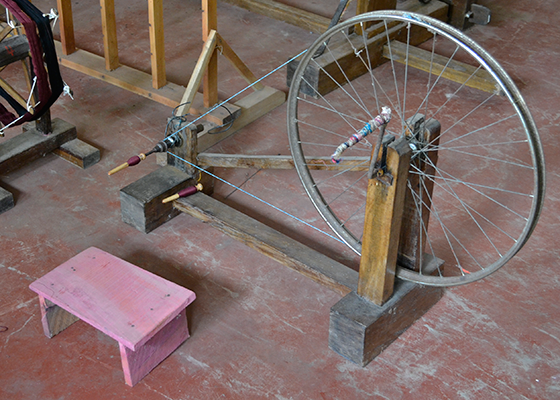 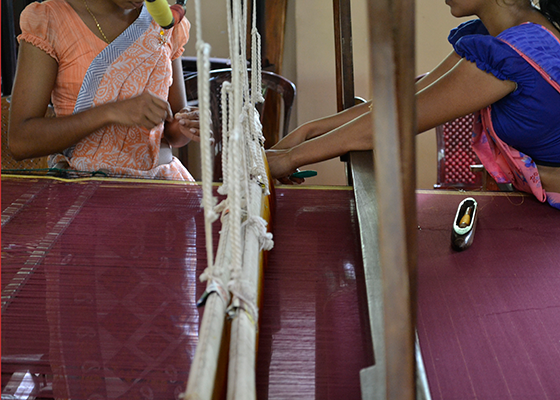 Born in Delft, the Netherlands.
Living in São Paulo, Brazil.
Educated at the Design Academy Eindhoven.
Postgraduate in social innovation management at the Amani institute.